I like day trips and one I enjoyed was visiting the city of Petersburg.  Great Antique shops to visit.  Can find plenty of vintage items.    So happy to see it being revitalized ,  as the history is rich and so many unique and  historical bldgs. 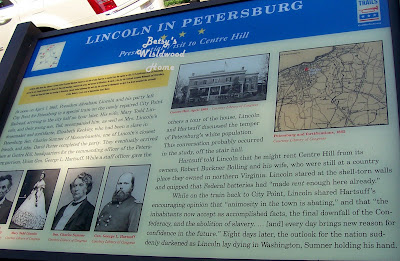 please enlarge so you can read the info.

This home is called Centre Hill -Robert Bolling IV built the home in 1823 and it remained a residence until 1936.  Interior was Greek revival architecture along with earlier Federal and later Colonial revival styles. The home had it's role during the civil war along with two Presidential visits.

The home is said to be haunted,  maybe that is why the blue paint color on the porch,  I have heard that the color blue keeps away haints.   Also heard it deters bugs,  and that is because like haints, bugs do not like to cross water.     I am going with the haint version.

Towards the end of the civil war the mansion was used as headquarters for a regiment of soldiers under Union Gen. George Hartsuff.     So at 7:30 each January 24 a regiment of soldiers enter the mansion for a brief meeting.   Residents of the home in the 1890's say they heard the front door open and soldiers   marching upstairs with their swords clanging against the railing to a small room above the office.
After about 20 minutes they are heard marching back down the stairs leaving through front door and
hearing it slam behind them.  Former residents have told of encounters with a beautiful woman roaming
the grounds. 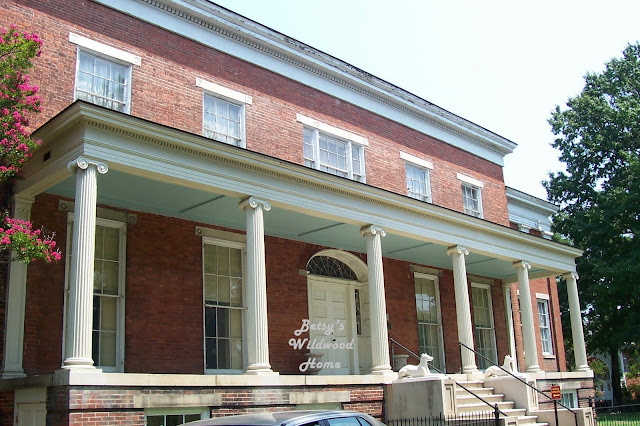 Dampness has had it's toll on the walls and sills.  Needs repair and some has been done to try to stop the damage like trying to re route water away from home. 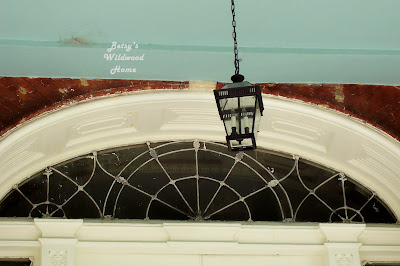 decorative type of metal work over the windows 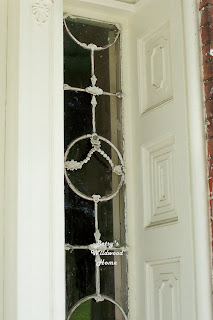 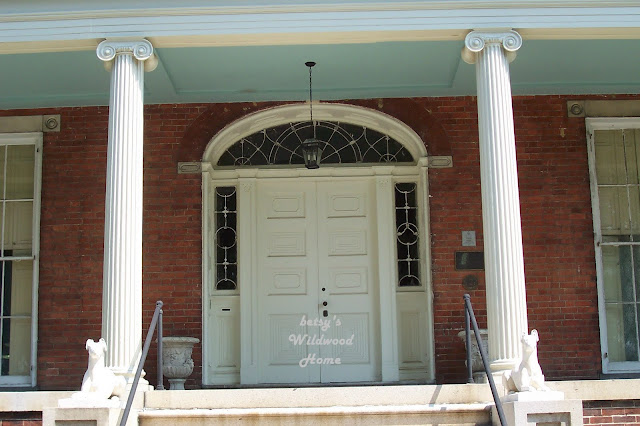 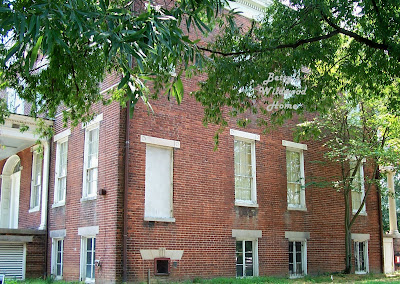 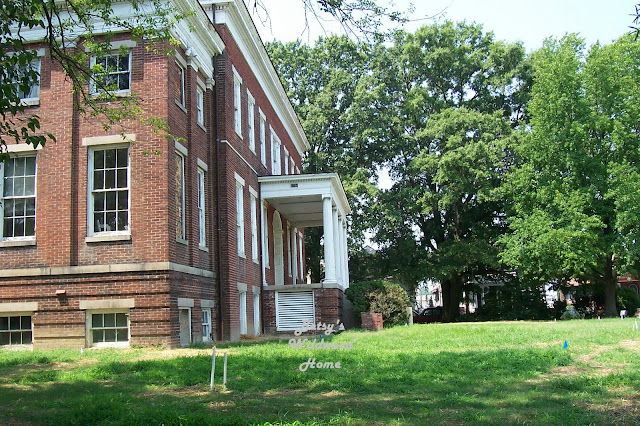 This would have been the front originally facing the river

only problem is ,  one cannot see the river.    The bldgs are being restored as you can see in picture, although it sort of looks like the war just ended with the way they look. 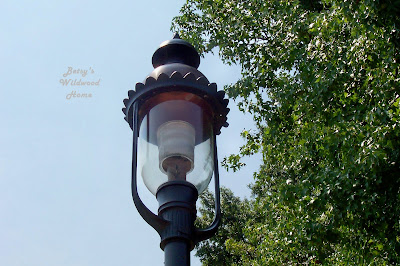 Light at the sidewalk of home

Very hot today,  the only thing I went outside for is to hang the laundry.   I must say I dried two loads in less than two hours.   It was so very hot and not fit for man or beast.
Sitting here looking at the plants in the window box along with stuffing my face with my homemade 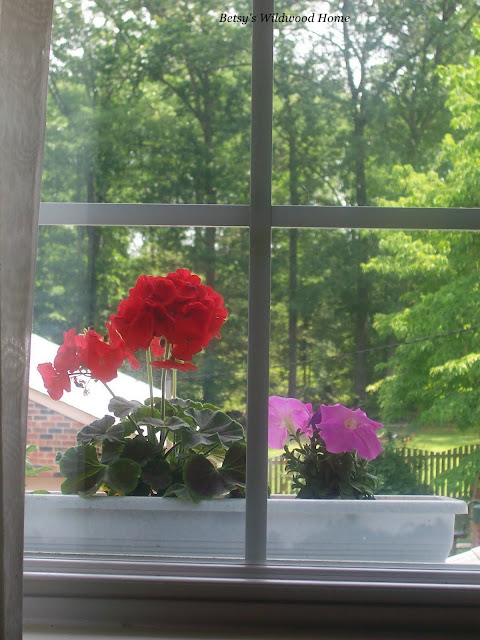 apple butter on toast , I decided I would make the spice cake mix in the cupboard.   Need all the sweets for energy on a day like this - NOT!
I added one 12 ounce can of A&W root beer to the dry mix and threw in a tablespoon of my apple butter too.  Mixed it well and then poured into prepared glass baking dish,  I believe it's an 11 by 13.   Baked according to time indicated on box,  well actually it took a smidgen less in my oven.
I let it cool.     A softened 8 ounce package of cream cheese , and small container of whipping cream.
I creamed the cheese ,  whipped the cream.   Mixed together with a teaspoon of more of my apple butter and sugar to taste.    Smoothed it on cake and Yummmmm. 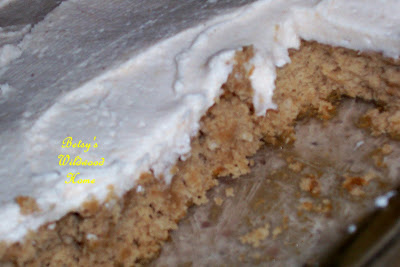 Don't have to add the applesauce,  but I had it and wanted too.   This was soooo goood.   No eggs, oil or milk, water.  Just the can of  root beer and my apple butter.
I have mixed a package of pudding and cool whip together and slathered on cake,   It's all tasty. 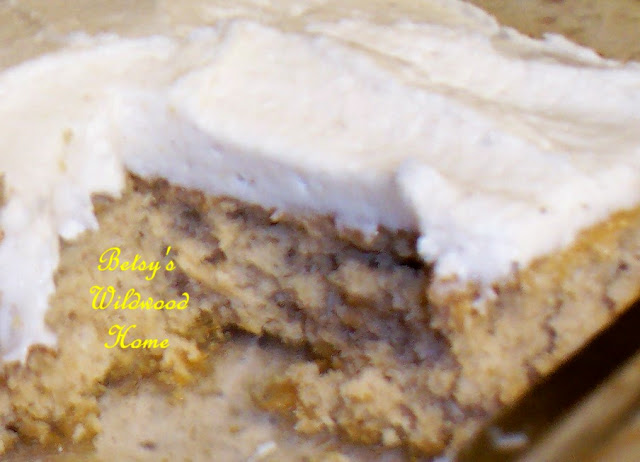 Another one I like  is orange crush with yellow  or orange cake mix.    love'm all.
Posted by Betsy at 4:42:00 PM 2 comments: Links to this post

Email ThisBlogThis!Share to TwitterShare to FacebookShare to Pinterest
Labels: dessert

playing around with my photos


Sepia is a tone I like, as it gives some pics a dreamy or romantic  type quality.
Origins - produced from the ink of the sepia cuttlefish.  Originally used as a watercolor pigment.

This one a little too sepia maybe
I trimmed my box to hug my statue.   I do like playing around in shaping my boxwoods.
Posted by Betsy at 7:43:00 PM 10 comments: Links to this post

Email ThisBlogThis!Share to TwitterShare to FacebookShare to Pinterest
Labels: front door and yard

Next time I will use more flowers so they will look full when they do dry.
I have more drying with my other flowers to decorate a small tree at Christmas.
Posted by Betsy at 12:16:00 PM 1 comment: Links to this post